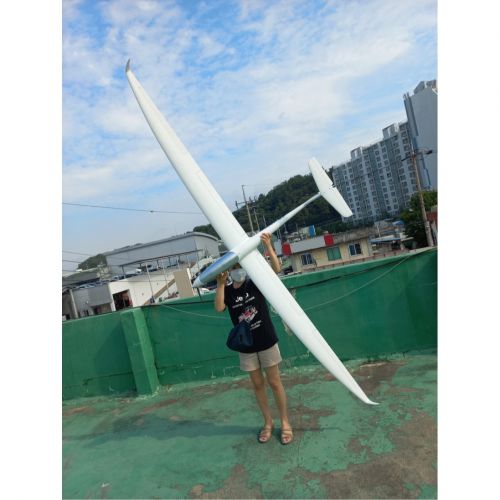 This is a Polish-made standard class sailplane SZD-55 NEXUS aircraft with a wingspan of 3m scaled.

It is based on precise scale and modified to have airfoil and wingspan suitable for R/C scale flight.

Despite being a large aircraft with a wingspan of 3m, its READY TO FLIGHT WEIGHT(AUW) is only 1,600 grams.

The wing with an aerodynamic twist is designed with a gently curved leading edge and a trailing edge with a retreat angle of 0.4 degrees. And, shark-tail shape winglets are applied.

Also, it has extremely low wing loading, stable flight is possible not only in thermal soaring but also on slopes.

The carbon pipe spars that intersect inside the fuselage are designed in such way that they not only stiffen the wing, but also make it easy to connect and disconnect. Actually, only 1 steel pin makes them to be fixed.

It is effective for quickly gaining altitude or slowing down when landing because it has a large area flaps.

Ailerons and Flaps can be combined into program mixing in your transmitter for more effective roll control.(called flapperon)

By combining a motor of about 500 watts and a 12-inch folding propeller, you can easily gain altitude even in an environment without slopes or thermals.

A canopy that can be opened and closed easily with a latch system and a large inner space of the fuselage are easy to work with.

Basically, this aircraft is a sailplane, So, it is not suitable for extreme aerobatics or high speed. You can enjoy a relatively slow but comfortable and elegant flight

It consist of a large number of parts and require careful and patient crafting skills.

If you have the confidence to take on a challenge, try it for great results.

More than 90% of parts are printed with LW-PLA. Parameters and G-codes for reference are included with the manual in the ZIP file.

Almost all parts are designed for continuous printing.

Parts you need(Recommended or Actually I used)