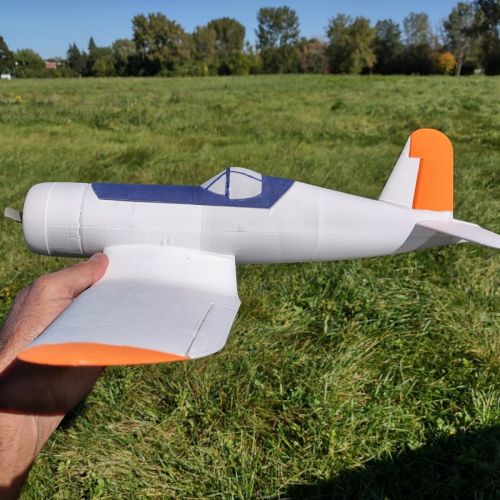 The Vought F4U Corsair is an American fighter aircraft with a distinctive inverted gull wing that saw service primarily in World War II and then the Korean War. Designed and initially manufactured by Chance Vought, the Corsair was soon in great demand. This illustrious warbird sported the distinctive inverted gull wing allowing for a shorter landing gear to clear that huge 4 bladed prop. It reached fame levels after teething issues on carrier operations with a weak landing gear and that long nose hiding the deck on approach.

This 600mm wingspan version is powered by a 2205 electric out-runner and is designed to be printed in LW-PLA, with a few key parts in PLA, like the motor mount, wing spar, propeller blades and hub. The design is relying mostly on S3D with minimum head moves to reduce the stringing resulting from oozing that is frequently found on LW-PLA airframes.
Note that a lighter 1806 2300Kv out-runner could also be used along with a 2S pack for an overall lighter bird.
Included with this file: • Factory files for Simplify3D
• Cura files
• STL files for all components
• Assembly manual and user guide
• Sample markings

UPDATES: 2022-10-19: Added Cura files. Improved a number of factory files. Version 2.0 (2022-09-26): This is a major update with many changes and improvements over the first iteration. Attention has been given to reduce the overall weight and improve ease of assembly. Here is a quick list of the changes: - Fuselage is much lighter and more LW-PLA friendly. - Carbon rods or 1.75mm filament to serve as stiffeners and for alignment when assembling the fuselage - Locating pins on wings and fin - Moved to 6x1.5mm disk magnets and added internal structures to support them - Matching holes for 2mm carbon rods through the stab and fuselage - New flat PLA spar to provide a much stiffer inverted gull wing - Easier to install elevator with F4 split in two at the elevator torque rod - Cowling reconfigured for easier installation of the motor and to move the flight battery forward - Fixed horn location on ailerons - Moved CG forward to 35mm Version 2.0a (2022-09-28): Minor updates/corrections - Added sacrificial support at the root of the wing on FF2 - Added wing root stiffener on FF2 - Thicker FF2, lighter FF4 and FF5 in factory file

For any questions and assistance please use the RC-Group thread: https://www.rcgroups.com/forums/showthread.php?3810693-F4U-1A-Corsair-600mm-LW-PLA