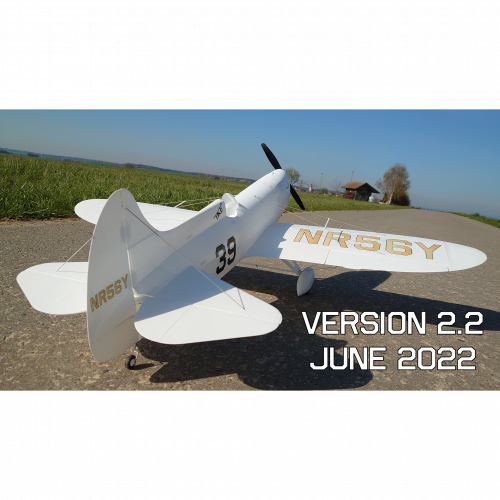 This 3D printable Howard DGA-5 download features:
Two versions of the "IKE"
(released on 25 Nov 2021 and 10 June 2022, respectively)
Project files for Cura
(including detailed print settings for each part)
STL files for all parts
(including STL files for LW-PLA optional printing of some parts)
Detailed user guide
(including optimized print setting information)
Link to a step-by-step build video
(see also video below)
The user guide can be downloaded HERE
Changes between Version 2.1 and Version 2.2 can be downloaded HERE
Test parts (of fuselage and LW-PLA tail) can be downloaded HERE
Ultimaker Cura is available for free. No need to spend extra money for a slicer software to get the "IKE" printed in high quality.
The model requires a minimum print bed size of 190mm/180mm/171mm. The provided Cura project and gcode files contain multiple model parts and require a print bed size of 240mm/200mm/171mm. Some parts can be simply removed from the project file in Cura to adjust the print area to your printer requirements.
Version 2.2 allows to (optionally) insert a carbon fiber pipe into the wing as extra robustness margin for cutting flight maneuvers. Some parts of the landing gear are reinforced as well and slightly increased louver openings in the fuselage further improve the scale impression. Last but not least, the engine side pull was increased to improve the take-off behavior.
Further information and discussions can be found in this dedicated thread on rcgroups.com.
Step-by-step video guide:
Howard DGA-5 Ike in action: